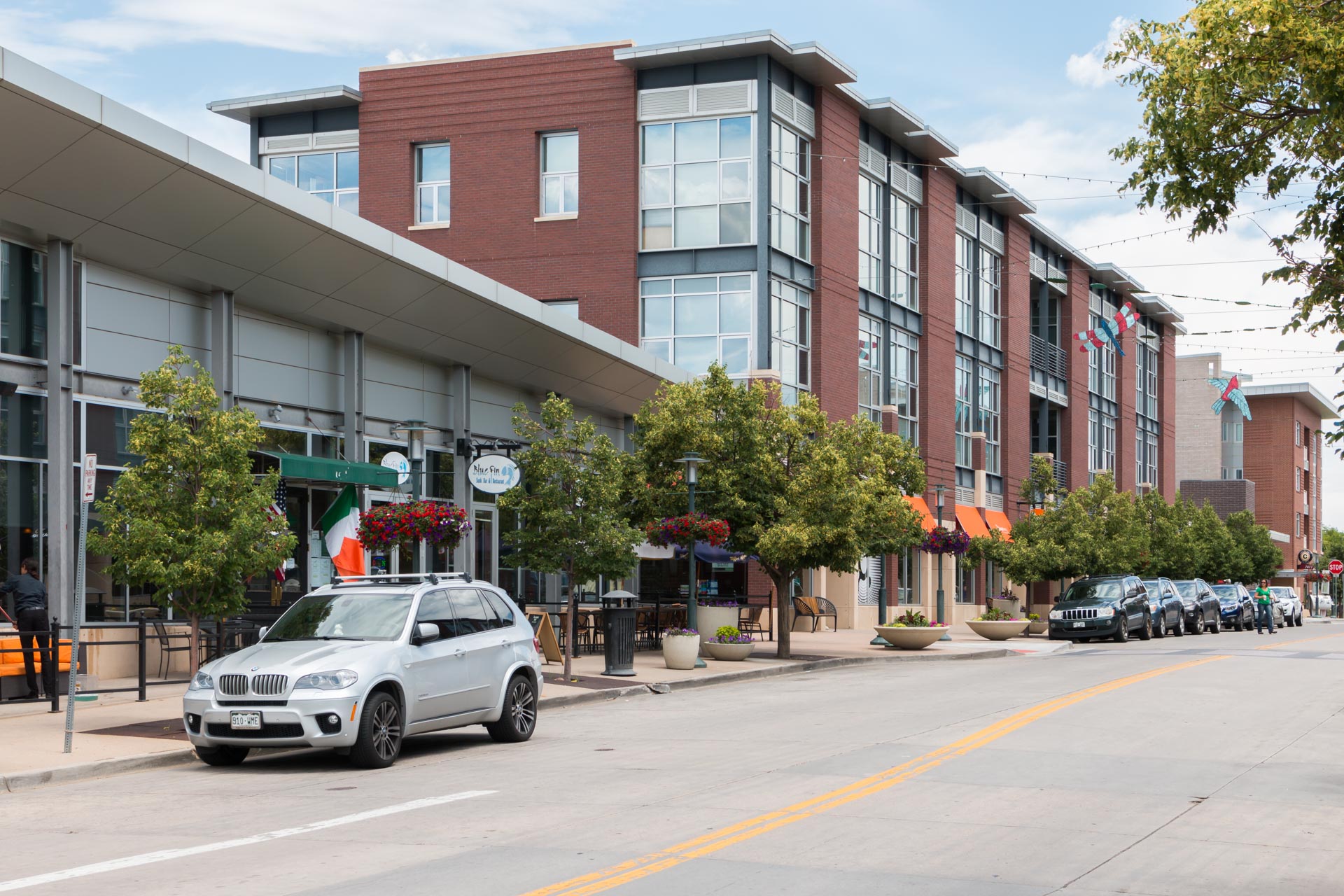 A view of the East 29th Town Center in Stapleton.

Where Stapleton Is in Denver

The Stapleton neighborhood and development is situated on a massive 4700-acre parcel in Northeast Denver once occupied by Stapleton International Airport.  This is an enormous area, running from Quebec Street on the west side to Havana and Martin Luther King, Jr. Blvd on the east, and from Montview Boulevard to the south all the way north of I-70 to East 56th Avenue and growing.  The expansion continues northwards, towards Rocky Mountain Arsenal National Park. Surrounding neighborhoods include Park Hill to the west, Montclair to the south, and the city of Aurora to the east.

Stapleton is a fifteen-minute drive from downtown Denver and a twenty-minute drive from Denver International Airport. Eleven RTD bus routes serve the neighborhood, along with the brand new University of Colorado A Line commuter rail stop at Central Park Station.

History of the Neighborhood – Born from Runways: A Grand Vision for Denver 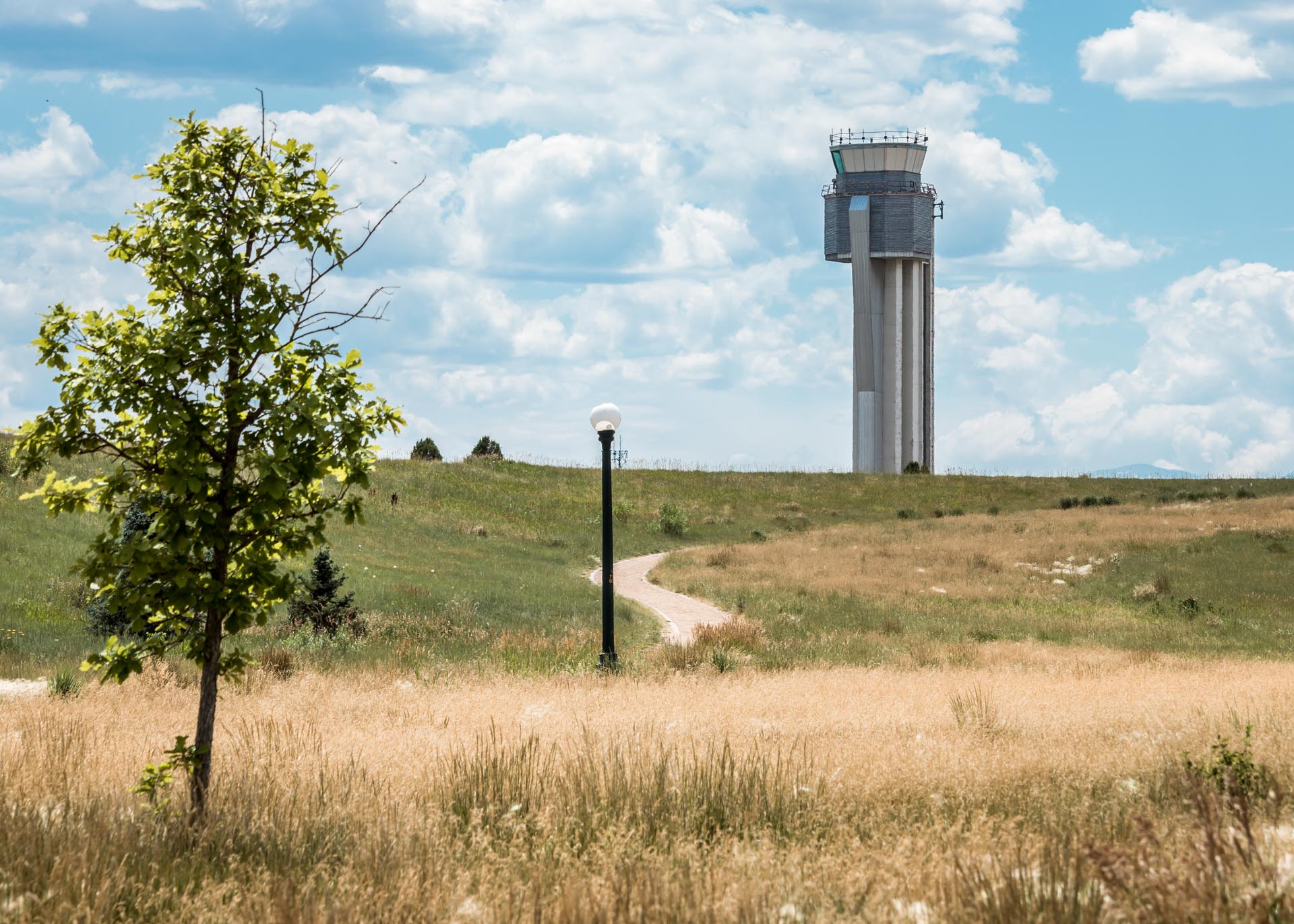 The old Stapleton Airport tower still stands in the Stapleton neighborhood and will soon be converted into retail space.

Once frontier and farmland, the Denver Municipal Airport was constructed in 1929 and renamed Stapleton International Airport in 1964.  The genesis of the redevelopment of Stapleton started in the late 1980’s when Denver voters approved the plan to build the new Denver International Airport.  Community visionaries saw a unique chance to create something completely new on this huge stretch of prime real estate, and in a true feat of urban planning, community involvement, and public/private partnership, the plans for Stapleton were born.

The Stapleton Development Plan (also known as the Green Book) was published in 1995, the same year that the new Denver International Airport opened and Stapleton Airport officially shut down. In 1998, Forest City was selected as the Master Developer to transform the 7.5 square miles of the former airport site into a green and sustainable community in Denver.

The first residents moved into their new homes in 2002, and the neighborhood has been continuously evolving and taking shape ever since. Over 20,000 residents now live in Stapleton, with more than 10,000 new residents expected in the coming years.  Upon completion, Stapleton will have some 12,000 homes (8,000 single family homes and 4,000 apartments), 1100 acres of parks and open space, over 2.4 million square feet of retail, and 10 million square feet of offices.

What Makes the Neighborhood Special – A New and Unique Urban Lifestyle 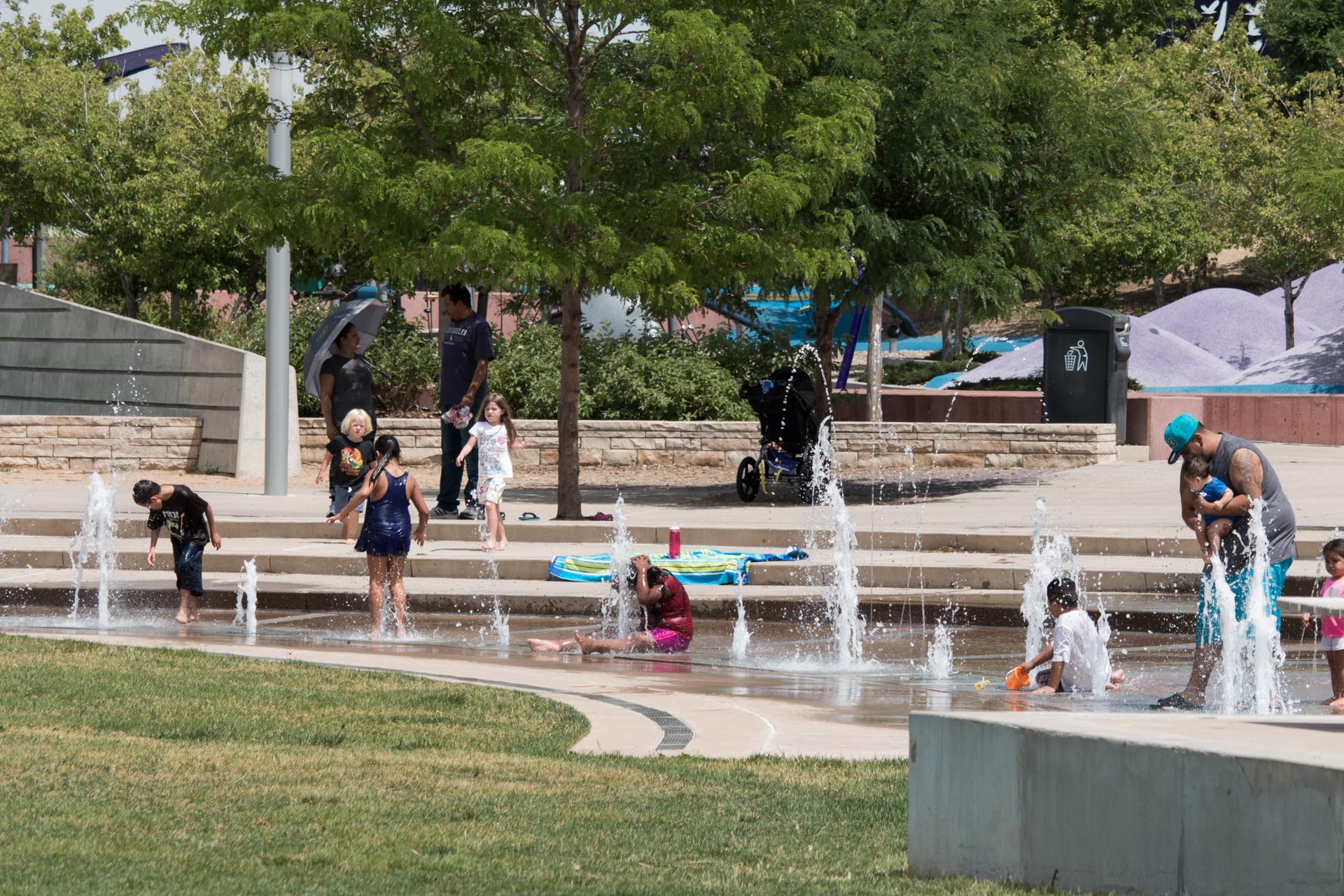 Families playing around the fountains at Central Park in Stapleton.

This meticulously planned urban community offers many tangible benefits that attest to its popularity: a rare chance to buy brand new near Downtown; plentiful greenways and open space; first-class recreation and parks; excellent schools; many housing options; convenient local shopping and amenities; and fun neighborhood events.  All these compelling qualities combine to create an intangible sense of community and purpose that may be Stapleton’s greatest attribute. 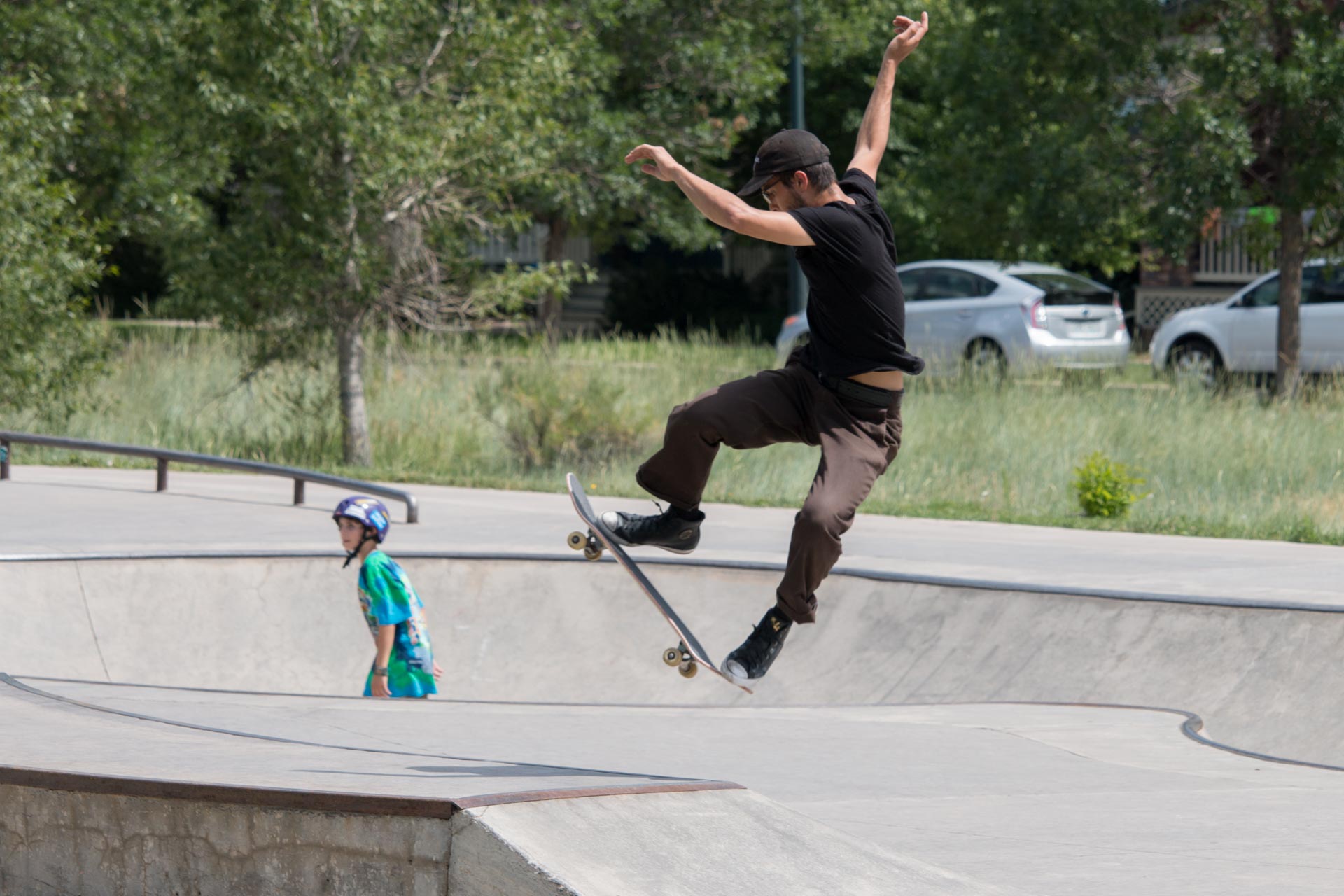 Skating enthusiasts trying out a few new tricks at the Skate Park in Greenway Park in Stapleton.

Ask a resident what they like about the neighborhood and they most likely will point out the green spaces and parks. Indeed, with nearly twenty-five percent of the development devoted to parks and open space, Stapleton is a tapestry of greenbelts, trails, and city parks.  The crown jewel of the system is the eighty-acre Central Park, Denver’s third largest park. Central Park features various athletic fields; plentiful paths for jogging, walking, and biking; and even an amphitheater. Smaller “pocket parks” are integrated into all the neighborhoods and enhance the green feeling, including the Dog Park and Skate Park located inside of Greenway Park. 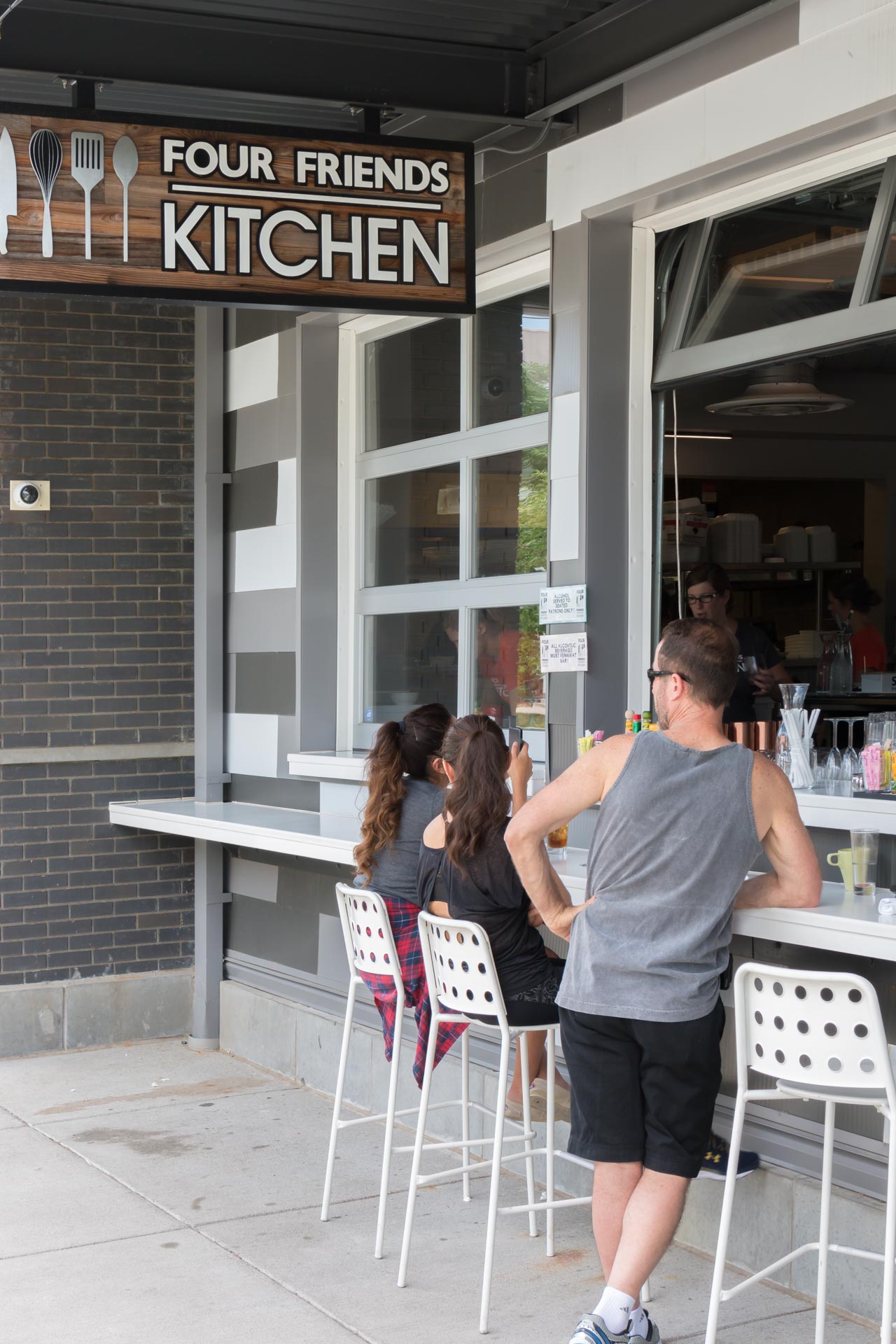 In addition to over 1,000 acres of parks and open space, the neighborhood also boasts a huge assortment of shops and restaurants. Choose from local establishments such as Four Friends Kitchen (one of Denver’s top ten breakfast spots, according to Westword), to national favorites such as Arby’s, Five Guys, and more when it comes to dining options. Buy groceries at one of the major grocery stores within walking distance from any of Stapleton’s neighborhoods, along with special outdoor markets during warmer months. Visit The Shops of Northfield Stapleton or the East 29th Avenue Town Center for local boutiques and services and national brands.

There is always lots to do in Stapleton, and Master Community Association organizes numerous fun public events—such as craft fairs, farmers’ markets, holiday parades, outdoor concerts, and movies—that promote community interaction.  Informally, neighbors also frequently organize their own block parties and social outings. There are also community gardens, community pools, and even eleven ping pong tables for residents to use.

The Ambience – A Nostalgic Feeling with a Tight-Knit Community 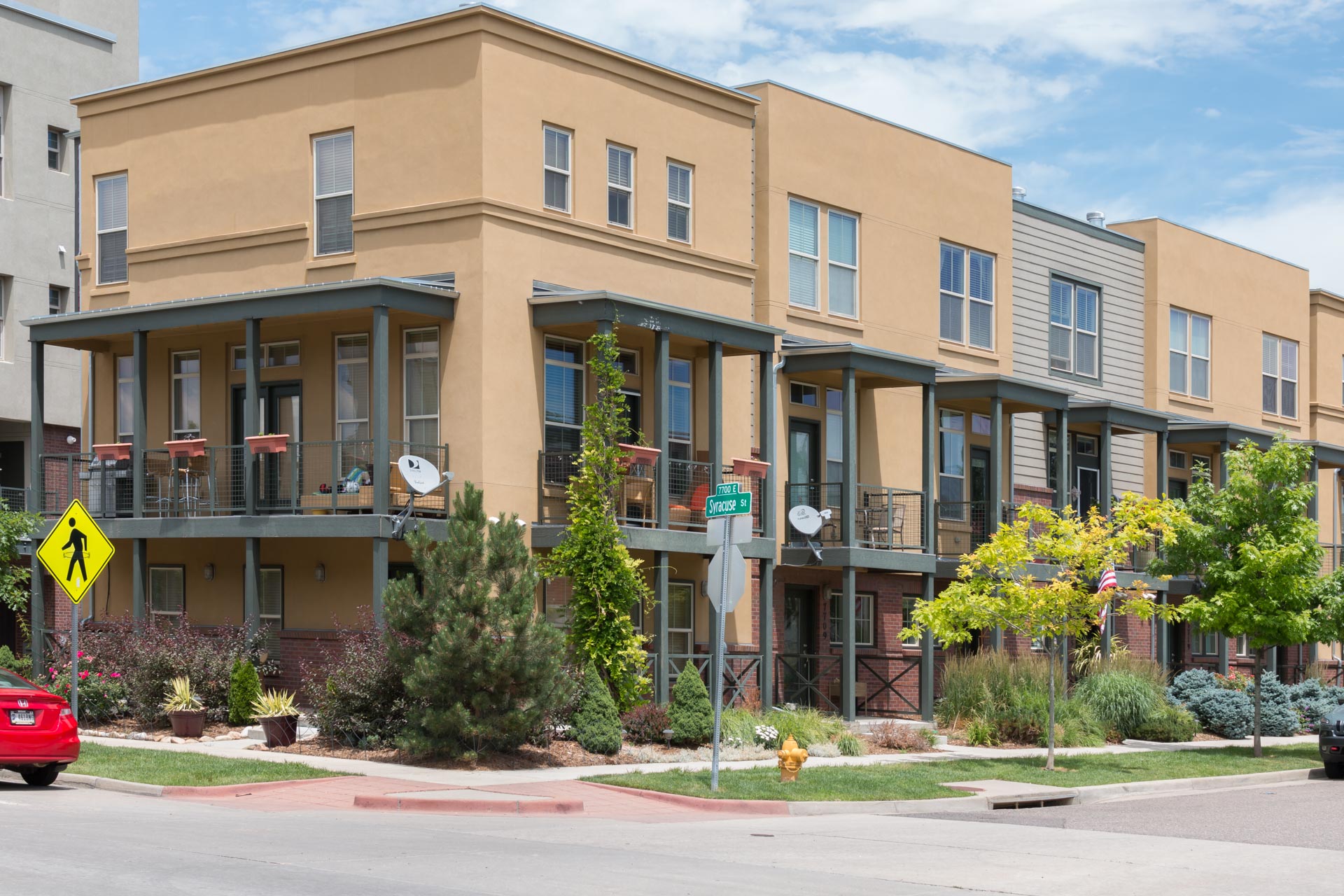 One of several different styles of homes in the Stapleton neighborhood.

At Stapleton, new urbanism means community first: the signature front porches on many of the houses evoke a sense of nostalgia, where neighbors walking by can wave at one another or stop to chat while on the way to the park, market, or shopping center. As mentioned above, neighbors oftentimes organize their own block parties and social outings amongst one another.

From conception, Stapleton was always intended to offer a great mix of housing options for residents.  Indeed, ten different builders offer twenty-one different home models and prices: from income-qualified townhomes and row homes in the mid-to-high $100K range, to single families in the high $300K to low $600K range, to the Haus at Stapleton homes from $700K and up, and everything in between. There are also many apartment styles to choose from, including age-qualified apartments for residents who are fifty-five years old and up. Currently, there are ten distinct neighborhoods to choose from, with more developments on the way. 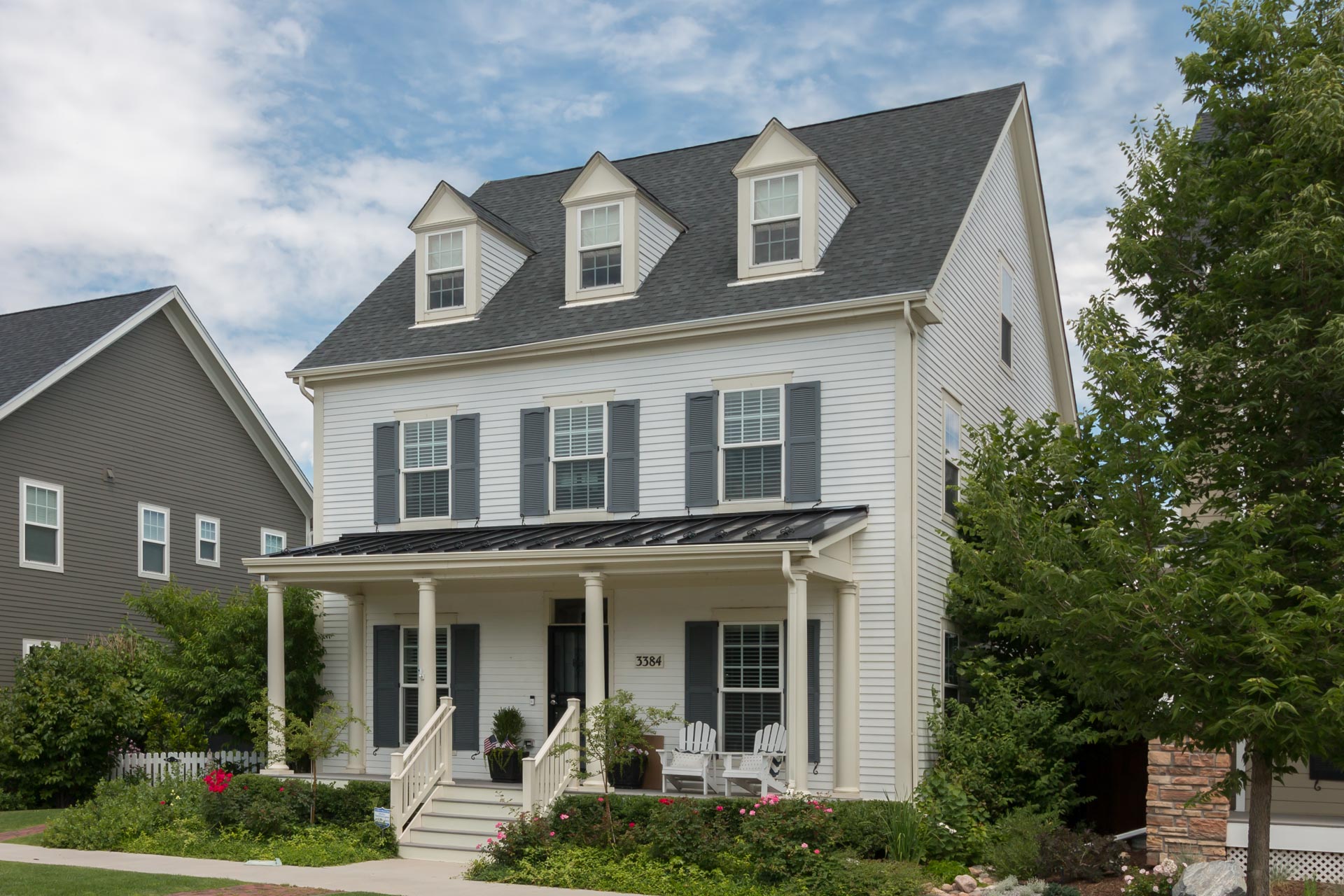 Many Stapleton homes have the iconic front porch as a prominent feature.

The architecture is mostly neo-traditional, reminiscent of older Denver neighborhoods, with many inviting front porches.  Other than appearance, the homes are all 21st century, setting the standard for energy efficiency and green building techniques.  The yards here are relatively small—usually about a tenth of acre—but most residents don’t mind, since there are so many surrounding open spaces and parks.

Stapleton’s intentional diversity of housing has fostered an interesting mix of people: while the typical household—at least in the single family homes—is a married professional couple with two jobs and two little kids, Stapleton also has its fair share of other groups such as singles, empty nesters, and even second home dwellers. 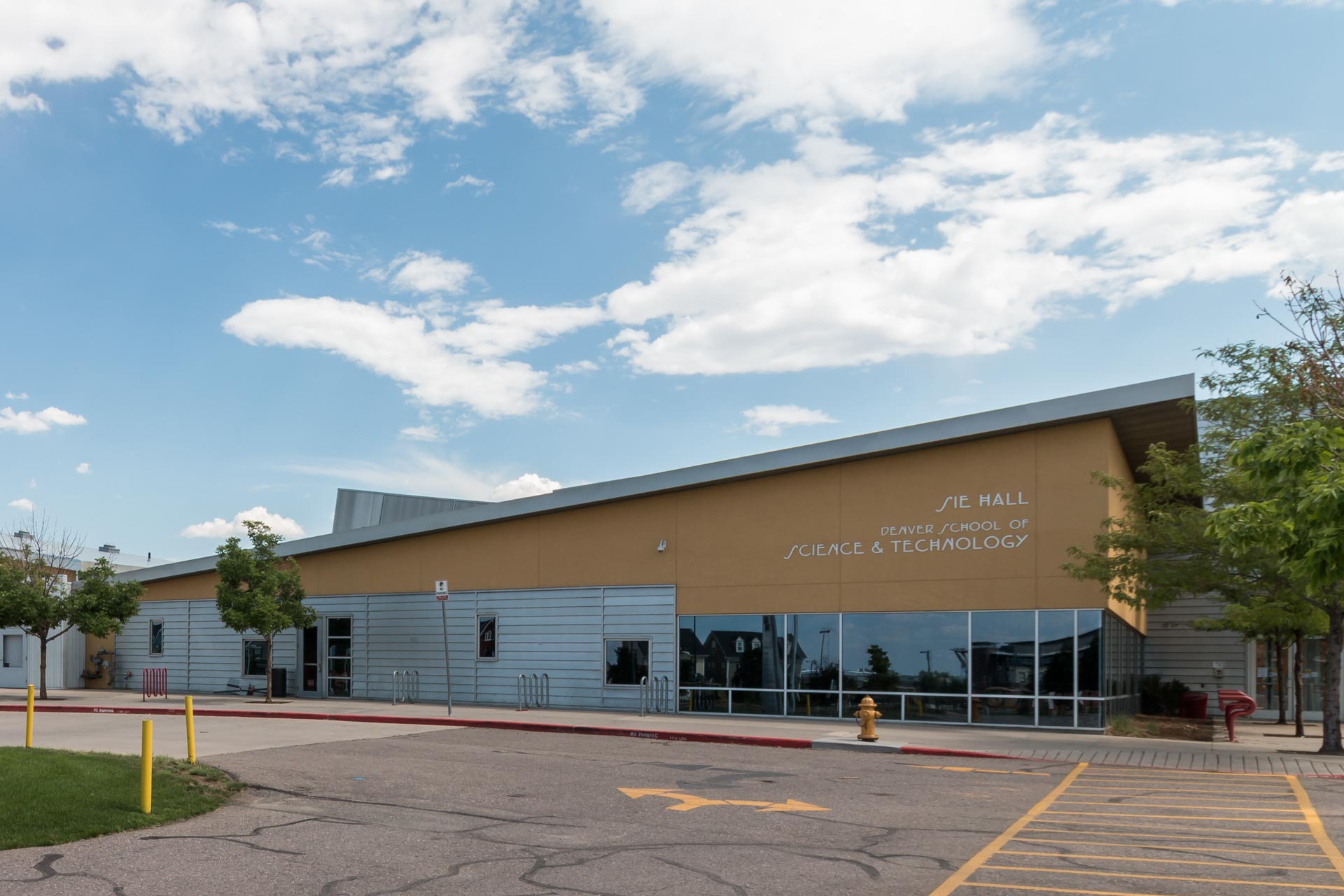 The Denver School of Science and Technology is located in Stapleton.

Parents have a variety of options to choose from when it comes to their children’s education in Stapleton, with a total of fifteen schools in the neighborhood. Primrose School and The Goddard School provide early childhood development instruction and daycare, while the Anchor Center for Blind Children serves over three-hundred blind children in the Denver area each year. 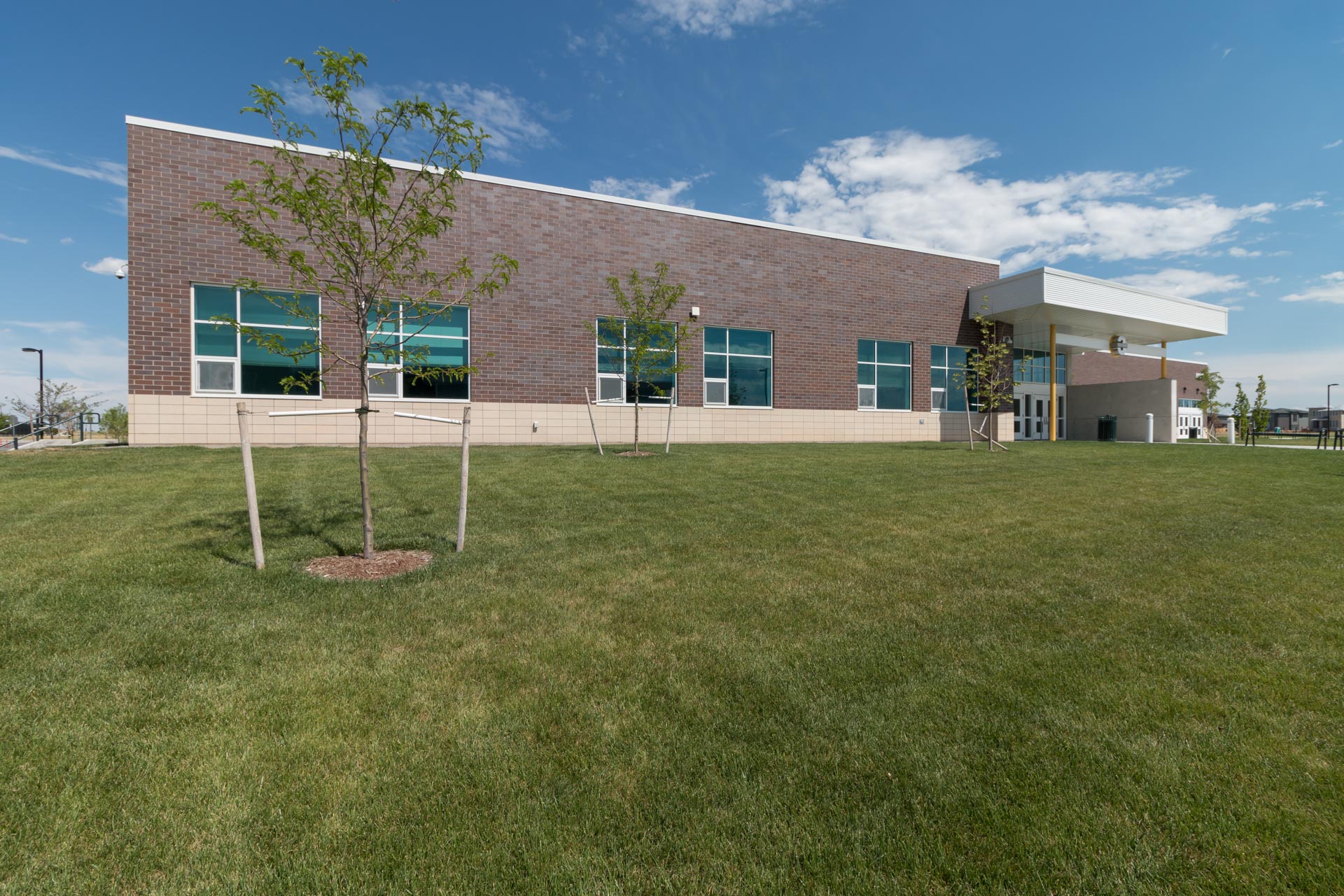 Northfield High School in Stapleton is the newest addition to area schools.

The brand new Northfield High School is part of the Denver Public Schools system with students participating in the International Baccalaureate Diploma Program. Northfield High School opened its doors last August and is growing the school to two grades (freshmen and sophomores) this next school year. The Denver School of Science and Technology (DSST) is the first charter high school in the neighborhood and requires its juniors and seniors to complete internships in the Colorado workforce. The McAuliffe International School serves both the Stapleton and Park Hill neighborhoods as a shared middle school with an International Baccalaureate (IB) program.

Other Denver Public Schools, Montessori, and private schools make up the rest of the schools available to Stapleton children.